Evidence suggests that, on average, active funds have underperformed their benchmarks in all market cycles. While low-cost active management can add value to a prudent investment programme, Vanguard believes that investors should evaluate their decision to go active based on their confidence in a given manager rather than the timing within a given market cycle.

Vanguard1 research shows that actively managed funds have, on average, tended to underperform their benchmarks, largely due to their charges. This result appears in UK, global and emerging market equities, as well as UK and global bonds.

Proponents of active management might argue that it comes into its own at certain stages of the market cycle. They might argue that active stock pickers can outperform their benchmarks during bull market cycles by aggressively overweighting stocks with higher betas, for example.

Another common argument holds that actively managed funds can outperform in a bear market because they have the freedom to move into cash or rotate into defensive sectors and securities, thus avoiding the worst of a downturn.

While both narratives are appealing, the reality shows that outperforming is difficult regardless of the market environment. Figure 1 shows the percentage of active UK equity funds that outperformed their specific prospectus benchmarks in any given rolling five-year time period. The chart shows clearly that active managers have not consistently been able to add value over their benchmarks and that the intermittent value they have added has varied considerably.

To be fair, active management has done reasonably well in some periods, such as during the early 2000s bear market. We examined those funds that outperformed in the five years ended September 2002, the best outcome for active managers in this analysis. We found that less than a third managed to repeat their outperformance in the following five year period. In addition, less than 45% outperformed their benchmarks in the next bear market: five years ended February 2009. Both results fell short of the 50% outcome that random chance should deliver.

So even when limiting our view to the best performing funds, managers failed to carry their success from one period to the next and underperformed during the next bear market cycle during the crisis of 2008 and 2009. That suggests that they could not repeat any skill they showed during the first bear market during the subsequent, a finding confirmed by our research on performance persistence 2. 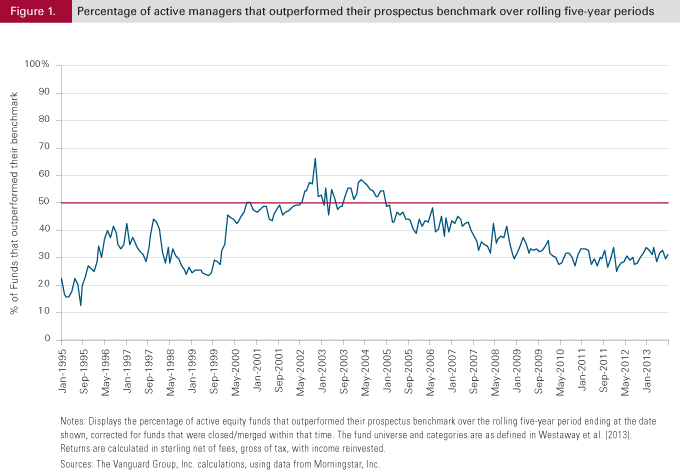 Figure 2 supplements this analysis by breaking the time period into bull and bear cycles, based on non-overlapping peaks and troughs in the global equity market. It illustrates how active UK fund managers in different market segments have performed relative to their prospectus benchmarks across market cycles. The results reveal no systematic ability to do better at particular stages of the cycle, despite short periods where active managers have outperformed.

To outperform over time, a manager must either accurately predict the start and end of a market cycle, or select winning stocks regardless of the market cycle. The combined results in Figures 1 and 2 show how difficult this can be. Over time and during specific non-overlapping market cycles, the typical active manager tends to underperform their benchmark. 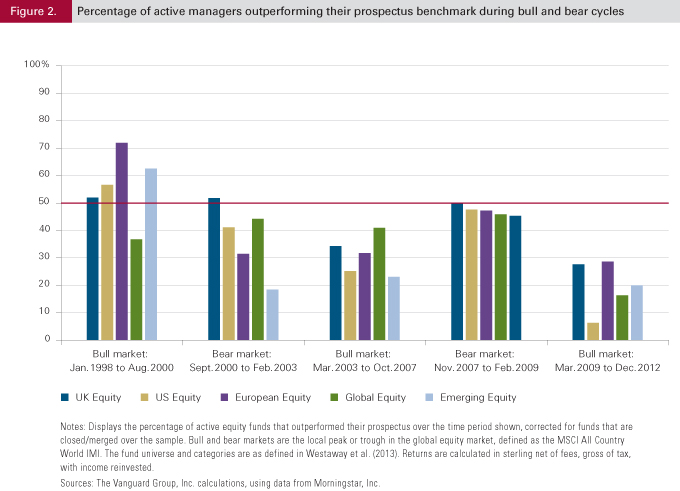 Our analysis shows that active managers do not display any consistent tendency to add value in bull or bear markets, and the majority tend to underperform their benchmarks over time. Because of this, we encourage investors to avoid trying to time the active-passive decision based on a particular market cycle. Instead, we believe investors would be better served by focusing on their long-term goals, with a particular emphasis on using low cost vehicles to achieve them.

The value of investments may rise or fall and investors might not get back the amount originally invested.