Ready for a new wave? 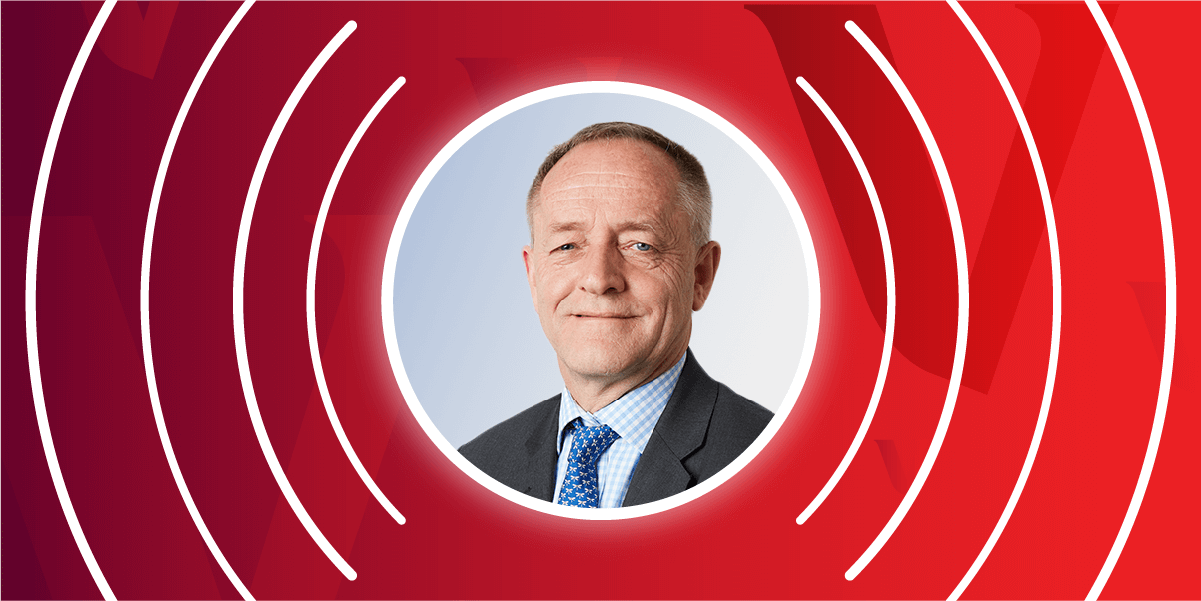 It was always on the cards. Now the signs of a second wave of Covid-19 are gathering pace in different parts of the world.

The question has never been about whether or not we will see another peak or surge in cases – without a vaccine it’s almost inevitable. The real question is, how will we manage a second wave?

In Europe, this is a particularly pertinent question given the high number of cases and loss of life recorded over the course of the first wave. Looking at the most recent data, though, it comes as a bit of a surprise that even some of the countries that were pretty successful in keeping the virus under control are now showing signals of emerging second waves – Germany in particular. There is a similar situation developing on the other side of the world, in Australia, where the state of Victoria has declared a ‘state of disaster’ as cases there have spiked. 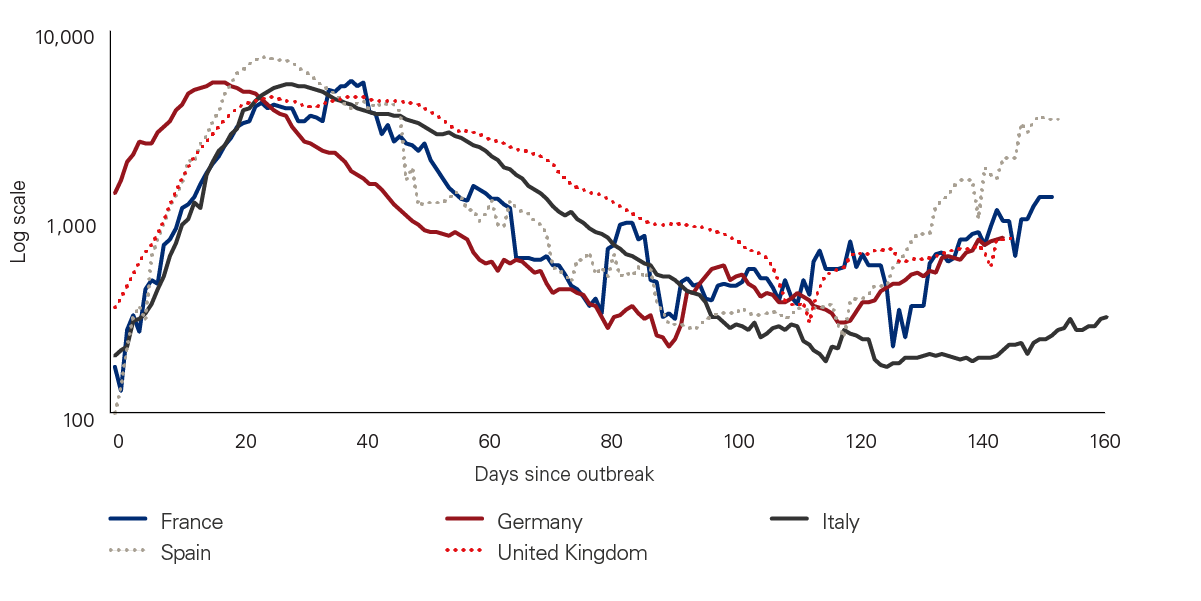 To put that into some perspective, Germany and Australia were being praised only weeks ago for their handling of the pandemic and their numbers are still relatively low in absolute terms compared with the world’s worst-performing countries. Here in the UK too, the official numbers are below 1,000 cases a day, but, ominously, the numbers are starting to creep up again – even if that is partly explained by more intensive testing in areas where local outbreaks are occurring. More serious outbreaks have also hit France and Spain – especially Catalonia.

In Asia, Japan has seen a rather steep increase with daily new cases in the low 1000s, while China has seen a more moderate increase from double digits into the 100s per day.

Meanwhile, in the US, the only good news is that the peak of the second wave in new cases appears to have passed and death rates are much lower than they were earlier in the pandemic, especially in New York. In Latin America they’re still very much in the first wave, which is barely under control, and there’s a similar story in other developing countries, including India and South Africa.

Now, as far as the impact on the economy is concerned, we are beginning to get more hard data in for the second quarter of 2020. We can see in Europe that the countries that were less successful in suppressing the initial outbreak, and dragged their heels in locking down back in March, have tended to be the ones with the largest falls in GDP in the first half of the year. We can see Spain and the UK suffering falls of 20-25% of GDP compared to 12% in Germany.

The economic impact of Covid-19 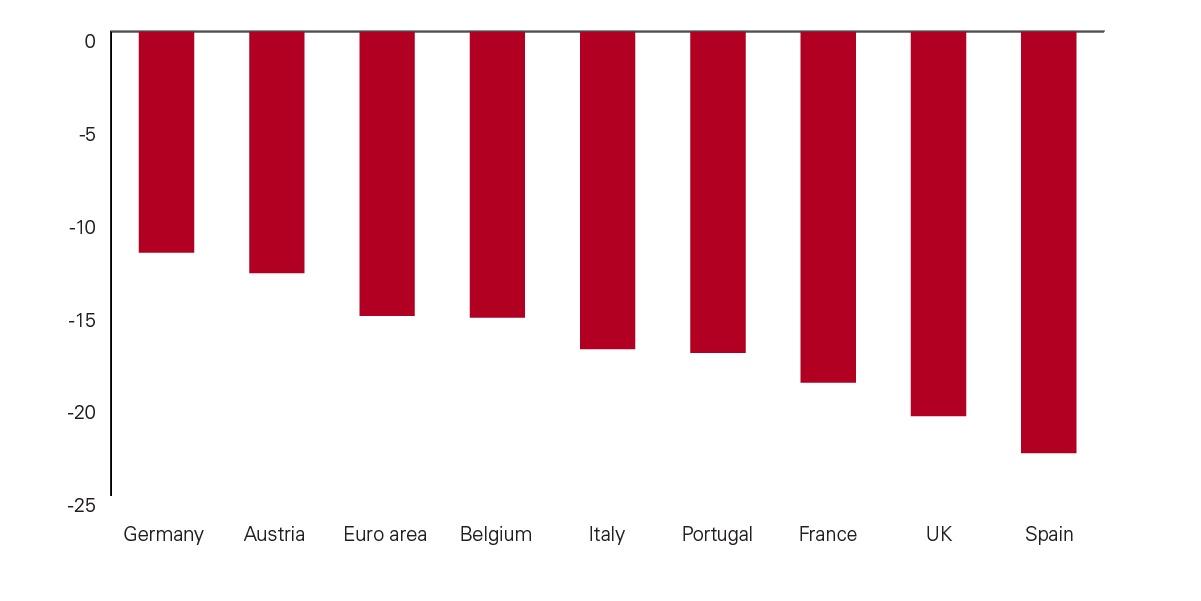 *UK data based on Vanguard’s GDP forecast for Q2 as official data not released yet. Source: National sources as at 4 August 2020.

So we know that an earlier response to the spread of the virus can be more effective at limiting the economic damage inflicted by lockdown and social distancing measures. The big difference with the second wave is that there is less overall community transmission and outbreaks are likely to be concentrated more locally. This means that the onus is on track and trace processes to prevent the virus from spreading too far, which prevents the need for nationwide lockdowns that are so costly in terms of throttling any economic recovery.

Whether incomes will support a recovery is very much in doubt. The risk is that as furloughing schemes are wound down in countries around Europe, the incomes of workers will fall and consumer confidence will be damaged (even more).

The table below shows how we think that the worst is still to come for unemployment – despite recent GDP figures suggesting a pick-up in activity.

Unemployment expected to rise across Europe

Spanish and Italian labour markets appear the most exposed 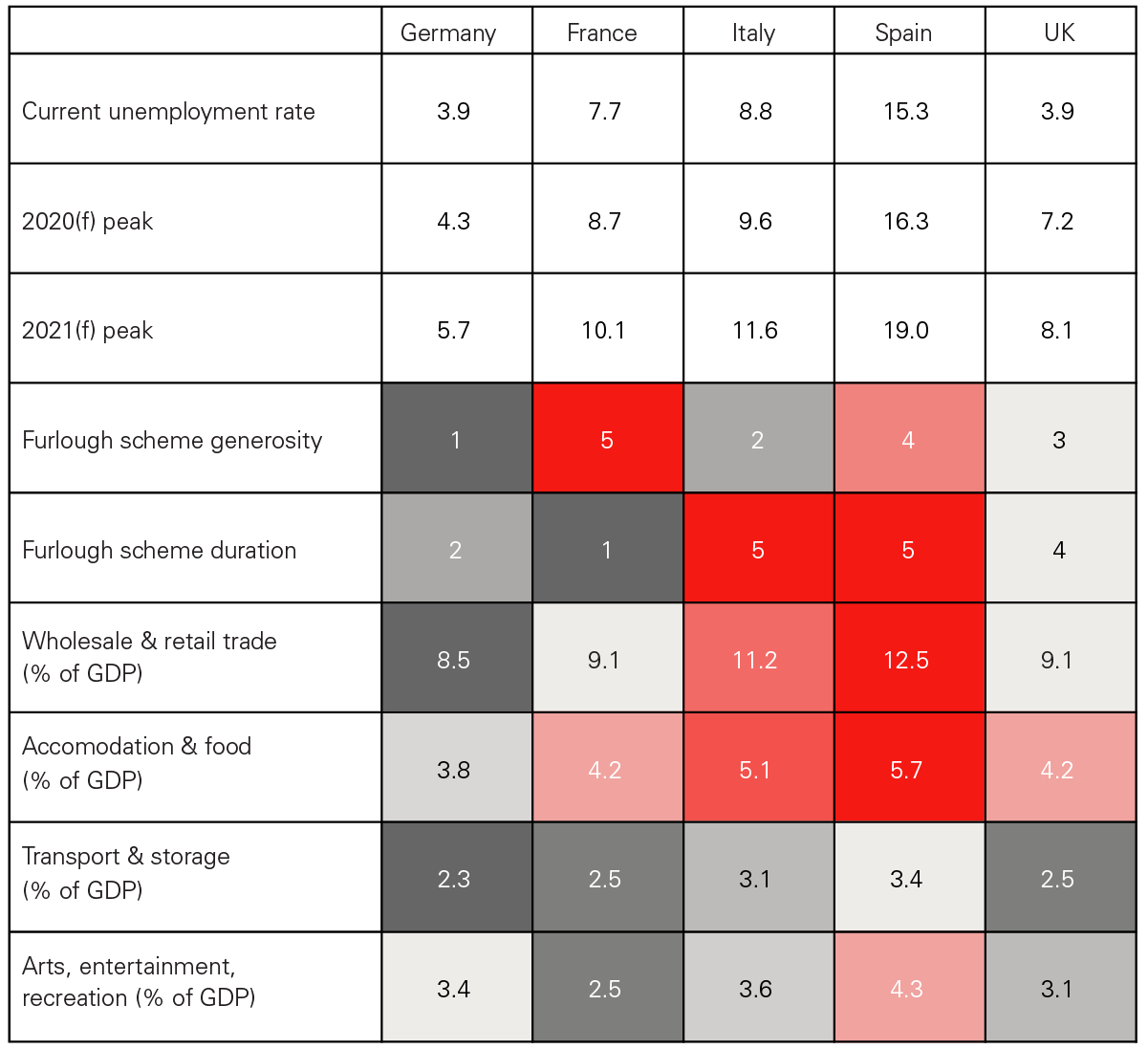 The extent to which unemployment holds back any recovery hinges on the generosity and persistence of the furlough schemes. The outlook is worse in those countries where the face-to-face wholesale and retail trade sectors and accommodation represent a higher proportion of national GDP, such as in Spain.

Even with government initiatives, like the ‘Eat Out To Help Out’ scheme in the UK, consumer fears may well be a big problem for many businesses operating in face-to-face sectors, as my colleague Shaan Raithatha explained recently.

That said, the picture painted by financial markets is a very different one. Despite all the continuing bad news about the pandemic, equity markets have generally continued to rally, led ironically by the US, which you might have thought would be the worst-performing market given the infection numbers over there.

Taking all that into account, it’s clear that different regions and countries will continue to muddle through until a vaccine is made widely available. Currently, we are assuming that this arrives in the second half of next year, but of course there is still enormous uncertainty around that timing and on how effective any vaccine might be when it is introduced.

With that in mind, investors ought to maintain a broadly diversified portfolio and remember the ups and downs of the economy and financial markets are all par for the course.