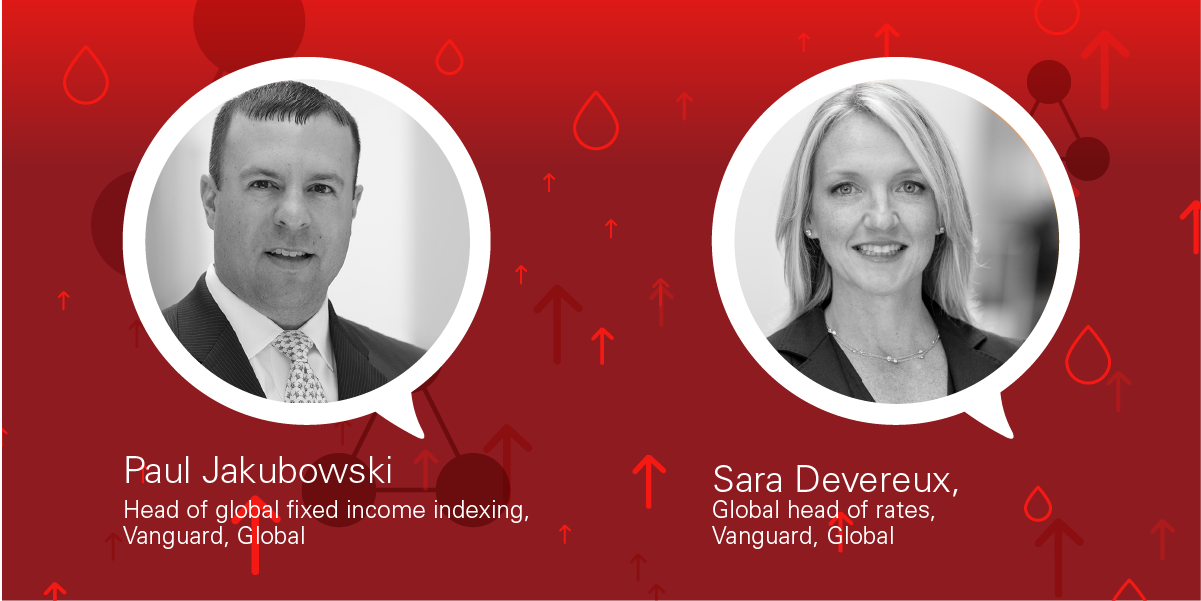 Bond markets shuddered in early March as it became apparent that efforts to contain the spread of Covid-19 would send the global economy into a sharp recession. A sudden loss of liquidity—the ability to sell an asset without impairing its value—took hold first among the highest-quality, typically easiest-to-trade bonds as investors sought the even safer haven of cash. Central banks responded to ease disruptions in the government bond trade, but liquidity issues remain a challenge in other parts of the bond market, especially for corporate bonds.

In the following interview, Paul Jakubowski, Vanguard's head of global fixed income indexing, and Sara Devereux, Vanguard's global head of rates, discuss the liquidity crunch, what the future may hold and potential implications for investors.

Where did the challenges in bond liquidity first appear?

Ms. Devereux: The challenges first showed up in the US Treasury market. It was pretty unusual to see bonds that typically trade at almost the exact same yield starting to diverge in terms of value based on their level of liquidity. On-the-run Treasuries, which are the most recent issues of a given maturity, and off-the-run Treasuries, or less recent issues, started to diverge, and those were the first signs of cracks in terms of liquidity in the market.

Why is liquidity so challenging at this juncture and how is it playing out?

Mr. Jakubowski: It's primarily about uncertainty, because we're dealing with something that's medical in nature. No one knows how many people will be infected or when a vaccine will be available. No one knows the magnitude of the impact economically or the capacity to rebound. When prices go down and the future becomes uncertain, people are going to take less risk. That goes for banks and liquidity providers as well. That's just natural human behavior. When they pull back on risk, it gets harder to sell things.

Liquidity is dynamic. It has so many different components: How quickly can you trade? How much can you trade, and at what price? And in times of stress, it obviously costs more. Transaction costs increase. Bid/ask spreads widen. [Bid/ask spreads are the difference between the prices at which a seller wants to sell and a buyer wants to buy.]

In the government bond market, you may not like the prices, but you can still trade. In areas of the corporate bond market, it's the same but more extreme, and as you go further down the quality spectrum, it gets harder and harder to find what the true prices are.

Ms. Devereux: In a time of stress, corporations want cash. They're not making income as they normally do, but they still want to pay employees. Banks want to make loans. In a normal market, raising cash is a very orderly, almost mundane exercise. But this time, what was different is it developed so quickly. And the magnitude of simultaneous demand for cash was unprecedented. The dealers who would normally warehouse that risk simply couldn't handle it. There's just not enough balance sheet to warehouse all that risk in aggregate, even if it's temporary. So central banks have to come in and use their balance sheets.

How have central banks responded?

Ms. Devereux: The US Federal Reserve was quick to react. They announced a programme to buy $500 billion in Treasuries and $200 billion in mortgage-backed securities. They've already hit that target, and they're still buying. They upsized the programme and basically said they'd buy unlimited Treasuries and mortgages, and the same day they announced additional facilities for corporates, for municipal bonds, for asset-backed securities. They had already announced a money market facility and they expanded that. So they're signaling they'll do everything it takes. Other central banks are responding too. The European Central Bank, for example, announced a €750 billion programme to buy government and corporate debt through to the end of the year.

But that doesn't mean an end to liquidity issues?

Ms. Devereux: No. While Treasuries are starting to trade better and mortgage spreads are tightening back up, the focus has shifted to corporates. I do think the central bank programmes will be successful. It will take some time. But for corporates, there are some key differences. Treasuries and mortgages are government-guaranteed. So they were really just subject to liquidity issues and needed to fix that. With corporates, there's going to be some real risk. Some corporates that are very high-grade are suffering just from the liquidity problems and the market not functioning. But others are going to have real fundamental problems. There might be some defaults, some bankruptcies, there could be some corporations that shut down. So it's a little trickier. It's not just about liquidity; it's also about credit.

Mr. Jakubowski: The fixed income market is really about cash flow. A company gets money in and can pay off interest and can pay its debt down. But when you're not getting any money in, as is the case in some industries right now, what do you do? You need short-term funding or a loan. You need cash flow to keep you going. Some very good companies rely on cash flow. You just can't go from millions of dollars of revenue to zero. The model just isn't set up for that.

How important is it that central banks are buying corporate debt?

Ms. Devereux: It's important on many levels. First and foremost, it's important to just improve the liquidity and get the market to function. But especially important for corporates is to keep borrowing costs low. We see this as a temporary economic contraction. And if we really want corporations to make it through, enabling their access to cheaper funding is critical.

How do market liquidity issues play out with investors?

Mr. Jakubowski: You need liquidity only if you're going to sell or you're forced to sell. So if you have a good, long-term investment plan, if your risks are aligned to your objectives, you should never be forced to sell. That's the same with a professional portfolio or managing a fund. If you're right in your outlook and your risk management, you should never have to sell. Now, that's hard. But it's much easier for individual long-term investors because they should have a horizon of decades. If you have a 30-year horizon, what's happening today shouldn't matter much, as long as you don't have to sell or don't need cash. Even for a retired individual, government bonds are producing a positive return. They're just realising that income earlier in the form of principal, or price appreciation, versus earning a coupon over five, ten, 15 years. And the coupon on these securities doesn't change. Their interest stays the same. If you have a bond with a 5% coupon and a 10- to 20-year maturity, it still pays 5%.

What are the considerations for active fixed income at a time such as this?

Ms. Devereux: Now could be a great time to consider active strategies. Because of this liquidity discount, you can get the same exposure in a much more valuable way if you know where the pockets of liquidity are and are not. For instance, in the Treasury market, there are bonds that look substantially similar. They're on the same point of the curve. They're government-backed and can be at very different prices and yields in an environment like this, and being able to monetise that liquidity discount is a great active strategy. In credit markets, selection is critical in a market like this. Our team has many years of expertise, and the opportunity set in the market is much richer than it was to start the year.

I would add, for both active and index, that it's a really critical time to understand what's in your portfolio. It's important that investors know about potential hidden risks in a portfolio. Funds that aren't true to label—that include types of bonds you wouldn't expect based on their name—could have cracks in their strategies. So it's a good time to take a hard look at that through a reading of fund materials.

What does the stimulus suggest about the prospect for inflation in the longer term?

Mr. Jakubowski: We haven't seen it for a number of years, but if there's ever a chance for inflation, it might be now, because governments are pumping so much in to both the fiscal and monetary aspects of the economy. People are getting help paying their mortgages, people and companies are getting help paying certain types of bills. They're all trying to buy time. But that can be inflationary if we come out of this very quickly.

Ms. Devereux: Governments are putting considerable stimulus into the market, and this is what we need. But when we come through to the other side, when we get through the worst of the economic effects of this, we're going to end up with a lot of stimulus in the economy. I suspect the Fed will continue to keep rates low, so that will anchor the short end of the yield curve. We'll see this reflation trade where rates will start to go back up with the short end anchored, and we'll get a steepening yield curve. By the way, the Fed has also been talking for some time about wanting to look at its inflation policies. It very explicitly said it would allow inflation to go higher. Other central banks are looking at their inflation targets too. They're going to have more tolerance for that than in the past.

Mr. Jakubowski: I think no one knows yet where equilibrium should be for bid/ask spreads and transaction costs. I would argue that for the last couple of years, it's probably been too tight and transaction costs probably too low. And now we're just swinging, probably too far, in the other direction. Frequently people frame it as, “When things are good, that is normal,” but that's not always the case. Liquidity, or the costs of liquidity, can be way too good at times. No one ever writes about that.