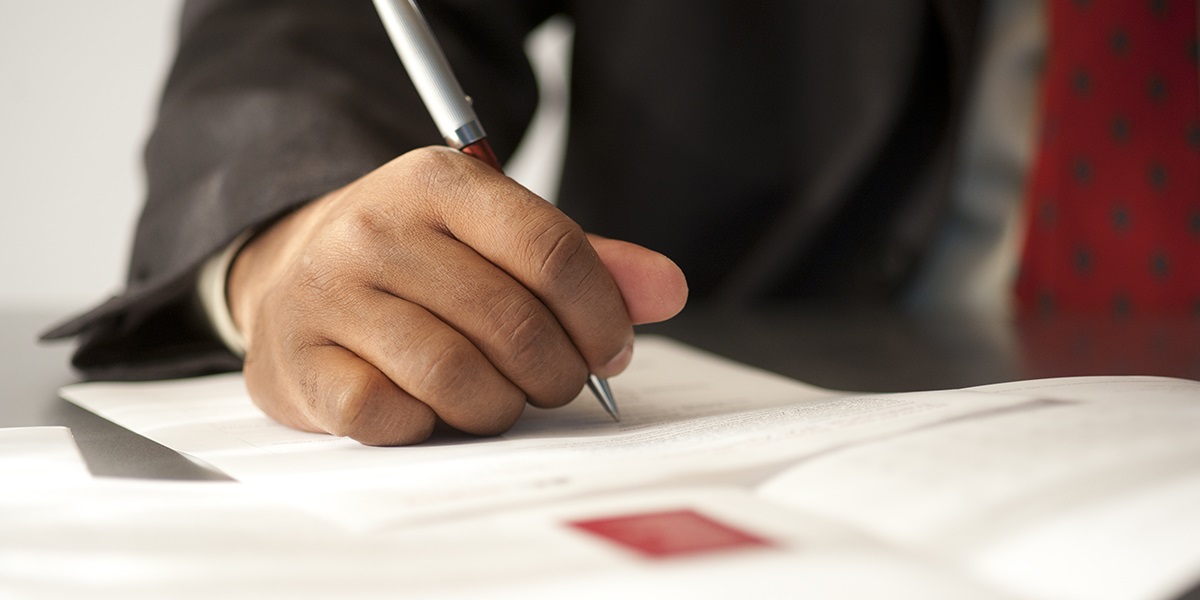 On 23 June 2016 the UK voted to leave the European Union. Shortly after, the new UK Prime Minister, Theresa May, declared that "Brexit means Brexit". This article outlines what we think Brexit actually means, and its potential implications for the UK and wider economy.

The referendum result came as a shock, not only to the UK public, but to the world. Tensions had been rising in the UK on a range of issues, including the increased flow of migrants into the UK, increased stress to UK public services, rising inequality, the increased threat of terrorism, and European policymakers' handling of the sovereign debt crisis. Analysis of the vote to leave, or "Brexit", has made clear that it was a reflection of increased economic dislocation and social conservatism in Britain (see Clarke et al., 2016). But it shares many of the same causes as the wider populist surge witnessed across the United States and developed Europe in recent years.

One serious complication with the Brexit vote is that, while it established a narrow preference to exit the EU, the terms on which the UK should leave were not clear. The more ardent supporters of the UK leaving the EU, so-called "Brexiteers", claim that the referendum result implied that certain key policies should be implemented. These include: (i) freedom to impose immigration controls on EU migrants; (ii) freedom to pursue trade deals with other countries outside the EU; (iii) greater flexibility to adopt the UK's own approach to regulation; and (iv) the termination of UK contributions to the EU budget.

In practice, there is no agreement on how the referendum result should be interpreted. And it has become clear that the government's approach may not be feasible without compromising on some of their declared objectives. As a result, it has proved difficult so far for the UK government to establish any kind of coherent "Brexit strategy", even within its own Conservative party.

For now, following the triggering of Article 50 of the Treaty on European Union in March 2017, Brexit negotiations are underway and a plan for future UK-EU relations has started to take shape (see Figure 1). So far, the UK and EU have agreed to several important aspects of the divorce, in addition to a conditional transition period of 21 months from March 2019, during which time the UK will effectively stay within the EU. Beyond this transition period, the UK government's current plan is to leave the single market, thereby re-establishing control over immigration policy, at the cost of UK citizens being able to live and work in the EU.

For the rest of 2018, the UK and EU intend to conclude a trade deal which will govern their relationship from 2021. The UK government is currently aiming to negotiate a free trade deal for goods, similar to the one currently in place between Canada and the EU. Under such a deal, the UK will face some tariffs and other restrictions to sell goods and services into the EU.

There is one major stumbling block in the trade negotiations, however, which relates to the land border between Northern Ireland (part of the UK) and the Republic of Ireland. The only way to guarantee frictionless trade across this border, which all sides have agreed is a necessity, is for the UK to remain in the EU Customs Union. This is something that the government previously ruled out because it would prevent the UK striking new trade deals with countries outside the EU. An inability to secure agreement on this issue runs the risk that the transition agreement will collapse and the UK might crash out of the EU with no trade deal at all.

Even if these trade negotiations can be resolved satisfactorily, there are further political hurdles as the final deal will be subject to the approval of the UK and EU parliament. If either parliament rejects the deal, then every aspect of the agreement is up for renegotiation. In other words, as the EU puts it, "nothing is agreed until everything is agreed".

Figure 1: Brexit talks are slowly progressing, but many hurdles remain

What are the economic implications of Brexit?

Although the Brexit vote was determined by a wide range of social and political factors, there has been a particular focus on the likely economic impact of the decision to leave the EU. Ultimately, the implications for the UK economy will determine future living standards and set limits on the affordability of public services.

Prior to the referendum vote, many well-respected economists and think-tanks predicted that, in the event of the UK choosing to leave the EU, the short-run impact would be for the economy to slip into recession. This fear was predicated on the belief that consumers would start to immediately defer spending decisions and businesses would delay investment projects in the face of such an uncertain future economic environment; this behaviour is rationalised by the option value of delaying expenditures in the face of temporary uncertainty (see McDonald and Siegel, 2002).

But this recession failed to materialise. In fact, the UK economy performed reasonably well in the immediate aftermath of the vote, no doubt because these adverse anticipatory effects did not occur so quickly. In addition, the economy was helped by the Bank of England's emergency response of cutting interest rates by 25 basis points and re-starting its quantitative easing programme. And the strength of the global economy, together with a large depreciation of sterling, provided a strong boost to the UK's manufacturing sector.

In fact, by the beginning of 2017, concerns began to emerge that the UK economy was running "hot". The demand-side of the economy was performing better than expected; and the Bank of England was becoming increasingly concerned that the supply-side was set to underperform, as Brexit may reduce the productive capacity of the UK economy (see Broadbent, 2017). Indeed, by the end of 2017, the Bank judged it appropriate to reverse the monetary easing conducted after the referendum.

However, despite the UK economy escaping a sharp downturn, the manifestation of a clear opportunity cost from Brexit has become more apparent. Whilst the rest of the world has enjoyed a synchronised upswing in economic activity, led by a revival in the global trade and industrial cycle, the UK has been left behind. As Figure 2 illustrates, the UK has gone from being one of the highest performing economies in the G7 before the Brexit referendum to one of the lowest after the vote.

Indeed, this Brexit "opportunity cost" has been highlighted recently by Bank of England Governor Mark Carney in May 2018, stating that the UK economy is now 2% smaller than what was forecast before the vote, according to calculations by the Bank of England.

Since the Brexit vote, the UK’s economic performance has slumped relative to key trading partners.

Today, Vanguard's leading economic indicator (VLEI) points to a further modest deterioration in UK economic growth momentum over the next six months or so. Real wages are finally growing again as the effect of sterling's depreciation drops out of the inflation arithmetic. And we expect uncertainty over the UK's future trading relationship with the EU to gradually diminish as negotiations continue and details are mapped out.

However, this must be balanced by the fact that practical preparations for Brexit will start to ramp up soon and some companies might consider relocating to continental Europe, thereby impacting business investment and hiring plans. This could lead to a further economic drag in the lead up to Brexit.

Turning to considerations of the long-run economic implications of Brexit, there is almost universal agreement among economists that the impact on UK living standards will be negative. Internal government estimates suggest that the impact will impinge on a range of sectors, with the economically-important financial services sector being potentially particularly hard hit (see House of Commons Exiting the European Union Committee [2018]). Figure 3 shows the range of estimates produced by economists, think tanks and official institutions in advance of the vote.

The one study which shows positive outcomes by the "Economists for Brexit" group (see Minford, 2016) has since been widely criticised for the implausibility of its underlying assumptions (see, for example, Sampson et al., 2017). Each study's estimate is itself subject to a range of uncertainty depending on the assumptions that can be made about the type of relationship between the UK and the EU after Brexit has occurred.

The critical assumptions determining these estimates are as follows: 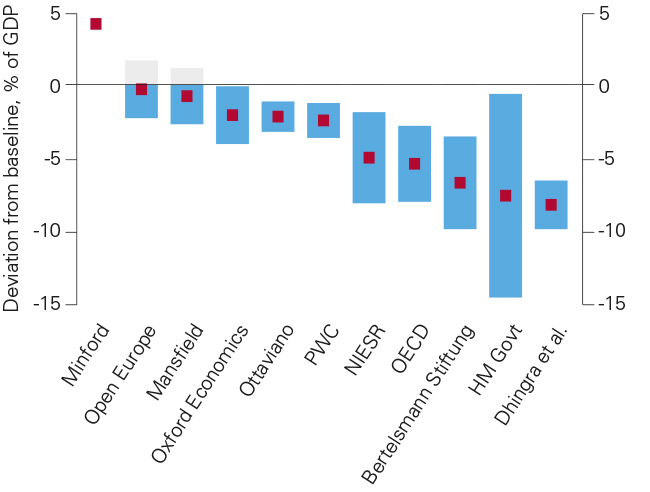 Given the ongoing political uncertainty surrounding the negotiations between the UK and the EU, it is still unclear how the UK's relationship with the EU is going to play out. This is an extraordinary situation given that it is now two years since the referendum took place.

In our view, there are five main scenarios which we think could still happen (see Figure 4):

A compromise between a hard and soft Brexit is likely.

Source: Vanguard. Note: This chart was published in Vanguard’s Economic and Market Outlook 2018, however the scenarios and probabilities have now been updated.

Does Brexit matter for anyone outside the UK? In the run-up to the June 2016 referendum, the International Monetary Fund had identified Brexit as a major risk to the global economy in their Financial Stability Review. However, in the event, the global fallout was limited.

The major concern was the possibility of knock-on consequences for the EU. Because the UK is a large trading partner, especially for adjacent countries with strong ties such as Ireland and the Netherlands, a direct economic impact was expected. However, as with the UK itself, the impact has been muted so far. In the event of a "Crash" Brexit, the immediate consequences are likely to be more negative. But in most scenarios, the negative economic impact is likely to be more protracted.

Politically too, there was a risk that the UK's departure from the EU might embolden other countries dissatisfied with their deal with the EU to follow suit. In the event, partly because the process of leaving for the EU has been so messy and burdensome for the UK, if anything, EU policymakers have taken the opportunity to draw the EU nations more closely together. Perhaps more significantly, with the departure of the UK, the one large EU country not using the euro, this might hasten the process by which other EU countries adopt the single currency. In our view, this could be risky for the euro area at a time when steady improvements in the functioning of the euro area might be judicious if the euro is to be sustainable as a successful monetary union (see Gray et al., 2018).

To conclude, Brexit will involve considerable disruption for the UK economy, in both economic and political terms. We are sceptical of the economic benefits that Brexit will bring for the UK economy and we fear that many of the economically disadvantaged citizens of the UK will lose out disproportionately as living standards fall and fiscal constraints on public services bite harder. Beyond the UK, the EU will be adversely affected too. However, we doubt that Brexit per se will set in motion a political domino effect that will undermine the integrity of the EU itself, though the populist forces that underpinned Brexit continue to present a threat to EU cohesion too.

This document is for professional investors only as defined under the MiFID II Directive. Not for public distribution. It is for educational purposes only and is not a recommendation or solicitation to buy or sell investments.